The National Women’s Martial Arts Federation has, for almost 40 years, been an active force furthering the participation and impact of women in the martial arts.  My karate teacher has been an active leader in the organization since nearly its founding, and this year my school hosted the NWMAF’s annual summer training camp.  The camp began last Wednesday, and many of the women I train with participated over the course of five days – they are wrapping the conference up out in Naperville as I type.

Last year, for the first time since a little experiment a decade ago, the conference hosted a Super Saturday event as part of the celebration.  While the camp is, as the name of the organization would imply, a women’s only affair, on Super Saturday the conference invited male allies – a term we use in this context to describe men who train under and with women as equals, and who embrace an empowerment model of self-defense.  They did it again this year, and, having participated last year, I wasn’t about to miss it.

The experience is a wonderful day of special seminars in various styles of the martial arts – truly phenomenal teachers share from their arts in creative ways.  As the day wanes and the seminars end, the evening brings an eclectic martial arts performance.  There was far more music involved in the performance this year, and it was much better stage managed; unfortunately last year’s music was nothing short of a technical problems maelstrom.  This year’s featured Kool and the Gang, Katy Perry, crossover rock/eastern instrumentals, the Beatles, and more – all accompanying spirited and beautiful martial arts performances by some of the best practitioners in their arts. 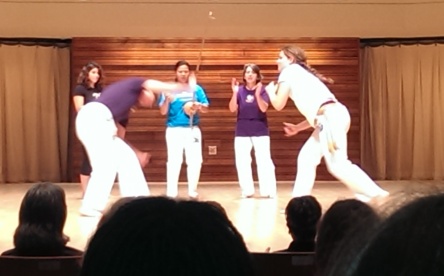 And there was Capoeira, so I tried my best to snap a photo, since  I wrote a while back on the lovely and musical Capoeira, a Brazilian martial art that incorporates music and dance along with martial movement.  The terrible, blurry pic I’ve included shows a couple of my friends/training partners (in purple), whose entire experience with the art happened at the camp, as well as the conference’s Capoeira expert (in blue) and a couple other of her students.  Note the berimbau that the teacher is holding, the traditional percussive/string instrument associated with the art, and, though obscured, the woman in black is wielding a tambourine.  The performers encouraged the audience to clap rhythmically and chant/sing along – “sim, sim sim, nao naooooo; sim, sim sim, nao naooooo,” yes/no in Portuguese, the native language of the art.  The Capoeiristas were among the more popular acts.

As I was last year, I’m once again awash in gratitude to have been able to be a part of this magnanimous group of women warriors for a day.  The martial arts and music are two forces that have been bringing people together for millennia; their fusion is something almost everyone can enjoy.