Picasso Sculpture at the MOMA (Yes,There are Violins) 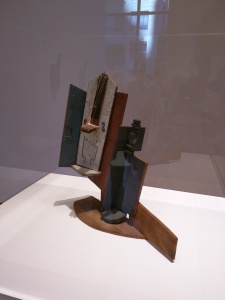 In 2011 The Museum of Modern Art in New York curated a minor exhibition of Picasso’s work featuring musical subject matter entitled Picasso Guitars 1912-1914.  At the time, Greta Berman, writing in The Juilliard Journal, discussed Picasso’s famous and ubiquitous musical subject matter, and especially the fact that Picasso was not a particularly musical man.  Pondering the prevalence of strings in his work, Berman says the great artist “enjoyed the shapes of both guitar and violin—perhaps it was their feminine curves he found alluring.”  She goes on to say that “if we are to believe Picasso’s companion from 1905 to 1912, Fernande Olivier, the artist had no interest in orchestral or experimental music. He reputedly stated that he had trouble staying awake when he heard the compositions of his periodic collaborators Erik Satie and Igor Stravinsky.”

The co-father of Cubism (along with his friend Georges Braques), there can be no doubt that Picasso was far more concerned about line, formal composition, and the essence of representation within abstraction than he was subject matter for subject matter’s sake.  Nevertheless, the ubiquity of the guitar and the violin in his work cannot be a coincidence.  One common theme to Picasso’s work is taking ordinary subject matter and showing it in provocative ways.  Much of humanity has indeed come to appreciate these two stringed instruments – in fact few would argue against the point that violins and guitars are among the most archetypal of all instruments; one key to the cubist project was an aesthetic treatment of common subject matter.  Berman also notes that the classical guitar reminded the artist of his native Spain – of course the man spent most of his life in in Paris. 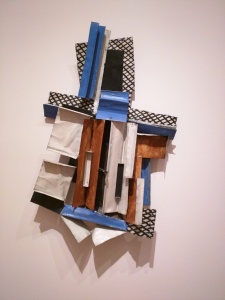 Last week at the same storied institution in Midtown Manhattan, I had the opportunity to view the greatest exhibit of Picasso’s sculptural work ever assembled. With its current show Picasso Sculpture, the MOMA, which since its founding has been one of the foremost champions and exhibitors of Picasso’s work in the world, has outdone itself.  In my own life-long passion for the arts, Picasso has been a steady presence – a one-of-a-kind favorite. It was during my very first visit to the MOMA, in 1995, that I encountered my first large-scale collection of the artist’s oeuvre – the unforgettable show Picasso’s Women.  Over the years, I have had the privilege of seeing many installations of his work, and I have made a point of visiting his canvases and sculptures in museums and plazas around the country.  I have taken a college honor’s seminar dedicated to the man, and have made appreciating his work and coming to terms with his complicated life a foundational part of my understanding of art and its place in our world, which has, over time, transformed my understanding of humanity as a whole.  Picasso: Sculpture, on display at the MOMA through February 7, is not only the greatest assemblage of Picasso’s work I’ve known about, but it is also the greatest curated art exhibition – period – that I have ever personally seen. 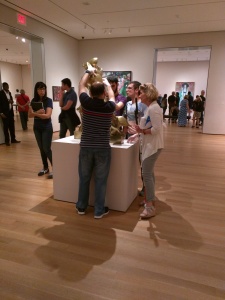 New Yorkers get to see a lot of great art – but in walking amongst the objects last Thursday it was clear that even for them, this show provided a religious experience.  One thing I love most about New York is its everything-including-the-kitchen-sink collection of humanity.  And indeed there we were – tourist, New York Socialite, the blind, the beautiful, the academic, and the uninitiated, all standing agog in appreciation of one of art history’s most important figures. The New York Times review perhaps sums up the experience best. Writing earlier in September, critic Roberta Smith says,  “Many exhibitions are good, some are great and a very few are tantamount to works of art in their own right — for their clarity, lyricism and accumulative wisdom.  The Museum of Modern Art’s staggering ‘Picasso Sculpture’ is in the third category. Large, ambitious and unavoidably, dizzyingly peripatetic, this is a once-in-a-lifetime event.”

To that I can only add: Go see it.