The Handel and Haydn Society 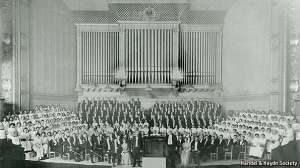 Handel and Haydn Society, 1915, photo via the Economist

The Handel and Haydn Society celebrated its 200th anniversary yesterday.  The Boston organization was established March 24, 1815 to allow its members to get together to sing the works of the two great composers.  That’s it – I love the singular purpose for which this group came together.  They were amateur musicians, and no formal training was required to join in the fun, but a good singing voice was desired, according to the Economist story I just read on the group, the first time I’m learning anything about them at all.

The group debuted that year with a Christmas performance that included Handel’s Messiah.  It was likely that connection that reminded me of a local sing-a-long that some friends have made me aware of here in Chicago – annually at Christmastime the symphony plays the Messiah and anyone who buys a ticket can come out and sing along.  They facilitate with scores and such.  I think it might be a lot of fun, though I don’t know much about reading music for singing and my singing voice is not in good shape.  The friends who made me aware of it have long participated in community choirs around town.

As I read about the H&H society, it became clear that the organization has moved on from its untrained roots – nowadays there’s a professional conductor and a hand-picked orchestra and a lean, well-screened group of singers.  The orchestra uses period instruments and also commissions new works.  I must say that I rather liked the sound of a totally amateur group cranking out Handel and Haydn all these years.  But I have my doubts as to whether it would have made it to 200 without the stewardship of some dedicated pros.  It sounds like the organization does a lot of good work with music education as well.

The photo above is from the organization’s centennial year, back in 1915.  If I end up in Boston I might look these folks up.