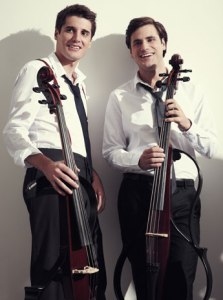 Elton John is one of my favorites, and so is the friend who introduced me to 2CELLOS, two young men who play their cellos in pop duets fiercely and well.  I mention the megastar because he picked the gentlemen up as part of his band, and they now tour with him, where their opening acts are met with standing ovations.  They are pop cellists with an aim to rabble-rouse, and Sir Elton vouches for their classical prowess as well.  I have nothing against showy entertainers, but I can’t deny the fact that I tend to be less fond of instrumental adaptations of pop songs than I am music that was written for the instruments under discussion.  I also tend to award fewer points for style than others might be inclined to do.  I’ve written a few other posts about crossover artists – violinists David Garrett and Vanessa Mae.  Both artists greatly impress me with their classical prowess, whereas I’ve only been able to see thunderous modern works played by 2CELLOS.  But let’s take Sir Elton’s word for it.

The Croatian duo is Stjepan Hauser and  Luka Sulic – both men graduated from top conservatories in Britain in 2011.  Both are accomplished cellists classically, with numerous awards for their classical work as well as for their powerful duets.  The pair has a new album out just this month called Celloverse – here’s one of their newer songs – Thunderstruck, their cover of AC/DC’s hit.  The vid already has over thirty million views on Youtube.  There’s no getting around they look good in tights, and I also can’t help but notice it really pays to be their bowmaker.

← Kreutzer Revisited
A Lesson at Last →